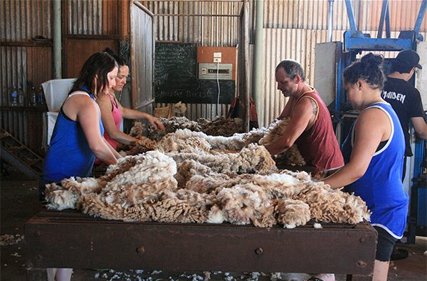 As the AWEX EMI closed the week at 1270c up 31c, the amazing result seemed “scripted to occur” in front of a delegate of over 500 attending the IWTO conference in Sydney.

The special sale held at the conference on Tuesday and Wednesday immediately opened with rises of 50-70c in the merino MPG’s catching many exporters by surprise, even though most thought the sentiment was positive leading into the week.

Exporters seemed to take a “buy at all cost” strategy in the 19-23 micron categories at Tuesdays Sydney sale, and this continued until late on Thursday in Melbourne where the final hours saw the hype and enthusiasm wane ever so slightly.

Whilst the fleece types revelled in front of the record conference crowd, in the next room the skirtings were more subdued and took until the end of the week to gather any signs of momentum, increasing up to 20c for the week.

The Crossbreds were a tale of two sectors with the 25/26 categories increasing the price levels in line with their merino counterparts and the coarser crossbreds posting from no change to 10c increase.

Cardings were also unable to gather any energy from the fleece price hike, barely maintaining the previous price levels. From the 48,878 bale offering over 94% was

In response to the market movements, exporters increased their forward bidding activity focused mainly on the near months.

Spring interest for 21 micron contracts lifted slightly with bidding into September @ 1315c whilst the offers were firmly cemented at at 1350c There has been some trade in the 19 micron contracts at 1415c for September.

Underpinning the market rise was the release of the Wool Production forecasting which conformed its December forecast of a 7% decline (322 mkg) and projected that there will be a further fall to 320 mkg in the 2016/17 season.