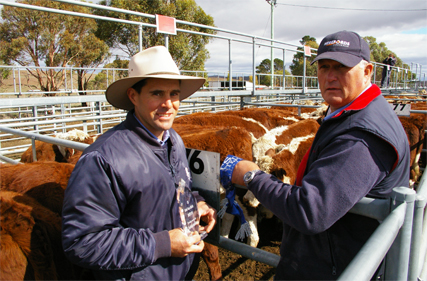 The nation’s top Hereford weaner steer price for 2016 of $1530 was set at the Roberts Bothwell weaner sale in Tasmania yesterday.

The Poll Hereford steers, aged nine to 10 months, were presented by Philip and Narelle Davie, Guilford stud, Ouse, at the April 7 sale.

The weaned steers weighed 468kg and sold for 326c/kg to buyer Ray Brammage for a northern Tasmanian steer finisher.

They were the heaviest purebred genuine weaner steers to be offered so far in 2016 across the blue ribbon weaner sales.

The second pen of Guilford steers were judged as the champion pen and presented with the sash by Herefords Australia director Gary Clarke, Ridgley.

Mr Davie was pleased weights at the top end were up 20kg on last year despite a tough season.

“We have no irrigation so the weaners were put into a paddock cut for hay and supplemented with silage,’’ he said.

“We did think about sending another truck load to Powranna but were optimistic about hanging on for Bothwell,’’ Mr Davie said.

“The sale was fully firm on previous store sales with the heavier cattle a bit dearer.

“There was a good crowd with mainland buyers operating on the smaller calves.’’

Mr Davie said the sale was driven by confidence in the beef industry.

“People have achieved good returns for calves bought last year and they are trying to secure cattle for what they can,’’ he said.