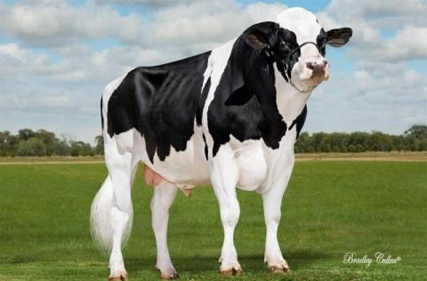 In what could be an ABV first, full brothers WRANGLER and GEEMCEE hold the top two positions on the Balanced Performance Index [BPI] while a third full bother CHALLENGER, also obtained a top all round first ABV.

Genetics Australia General Manger Anthony Shelly said the result was most pleasing and justifies the investment and support Genetics Australia has shown in embracing Australia’s new breeding indices and in the use of genomic technology.

“We first began to include genomic data in our young bull selections as far back as 2008 and with continual improvements to the reliability of genomic breeding values we are really beginning to see the improvement in Australian bulls, particularly in the hard to measure traits such as health and fertility. MEDALLION and more recently CHRISTMAS were great examples of how genomics can help lift the quality of bulls selected at a young age. WRANGLER and his brothers now with the improvements to genomic technology were selected on the basis of their genomic rating and now represent the new era in Australian standing Holsteins, and that is not only great news for our cooperative but even better news for Australian farmers.”, he said.

The April ABV release also saw the new release of the top new genomics sires and the results for the cooperative could not have been more pleasing. Seven of the top 10 Holstein bulls stand at Genetics Australia, reinforcing the investment in genomics and assuring Australian famers will continue to have ongoing access to world class bulls standing in Australia. KINGTUT, also bred by Rengaw Holsteins heads the Holstein BPIg list at 308 and offers a 111 Daughter Fertility rating while the successful Manna Farms herd from Yankalilla in South Australia bred second placed Holstein COOLBLUE.

The result for the Jersey genomic team is no different with 7 of the top 10 bulls standing in Australia and all owned by the cooperative.

“We see the demand on high rated genomic bulls continue to rise every year and we will continue to offer our shareholders first opportunity to select these bulls as part of our Horizon progeny test program at PT prices. The best of the young genomic bulls will also be available more widely as they complete progeny test distribution. A combination of the top proven bulls together with the best young bulls in a breeding program has increased the range and variety of bulls available to farmers and will continue to help lift the genetic merit of herds around Australia”, he said.