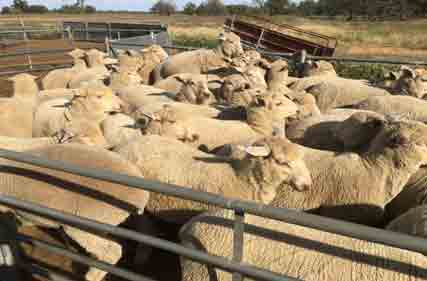 The online market for sheep and lambs was slightly softer last week, as some good rain through the south east reportedly refreshed buyer confidence, but also renewed seller expectations.

Total sheep and lamb offerings exclusively through AuctionsPlus reached 72,020 head, which was down slightly on the previous week (72,964 head) – with a surge in crossbred lambs largely offset by a sharp fall in the number of Merino wethers and shedding lambs offered.

While patchy rain early in the week resulted in a slight rise in interest for the first cross ewe lamb portion of the market, the 24% increase in offerings was too much of a supply factor to offset.

For the two Merino lamb categories, overall numbers were back on the previous week, with ewe lamb numbers back 10%, at 5,027 head, while the wether portion of the market contracted 58%, at 6,354 head.

Even with the reduced offerings, wether lambs decreased $5 on last week, to average $140/head, at a 62% clearance rate.

The joined ewe market was weaker, with average prices down for three of the four main categories – with the overall clearance rate falling on last week.

With the overall supply of SIL Merino ewes jumping 19% on the previous week, with 12,325 head offered, prices averaged $7 lower, at $245/head, as restocker demand and the willingness to increase bids remained stagnant.

In contrast to the other joined ewe categories, SM Merino ewes averaged $44 up on last week at $240/head.

The unpredictable NSM Merino ewe market kicked higher this week, defying the impact of a 48% rise in offering, at 5,486 head. With a 79% clearance rate, the NSM Merino ewes averaged $48 higher, at $188/head.