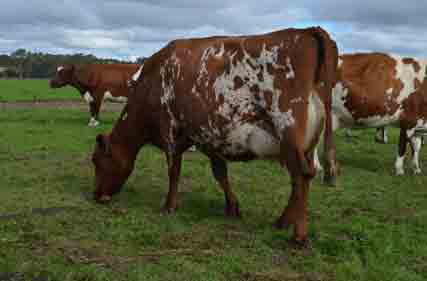 South Australian Ayrshire Breeders staged the inaugural SA Ayrshire Spectacular Sale with all lots on display at Mt Gambier Showgrounds and the auction conducted from a DLS Office in Victoria and livestreamed by Elite Livestock Auctions with buyers and bidders from SA, Victoria, NSW, Tasmania and Queensland.

The sale top of $7,750 was paid for the ‘Pick of Twins’ Omega Gen Reagan Rose offered by Ben and Caitlyn Hentschke.

This top line heifer is from an EX 90 Doublewhammy who has won Champion Cow of the 2018 Fanfare Show with the 3rd & 4th dams also EX and bred from the famed Star Rose family, she was purchased by the Hayter Family of Euberta, NSW.

These buyers also selected the 2nd top lot, Boldview Burd Rebilla a direct Burdette daughter from a VG dam with 336 kgs fat and much potential, she was sold by Boldview Farms at $5,100.

Third high seller at $4,950 was Boldview Famous Addition, a daughter of UK sire Hunnington Famous from a dam with PI’s of 123, she was purchased by L & J Gass of Princetown, Vic.

Ferguson Farms of Toolamba, Vic were strong buyers throughout the sale, their selections included Omega- Gen Bigtime Avicii a daughter of Rockvale Burdette Avie 5, VG 87 at $4,000 and the outstanding unjoined heifer Boldview Ginger Model also at $4,000.