Crossbred lambs and first cross ewes all up in price 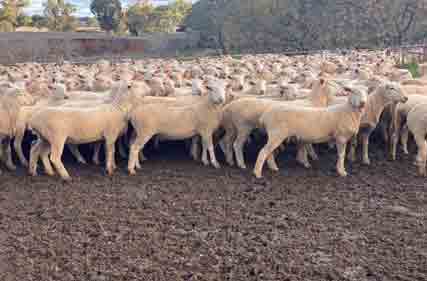 First cross ewes continued to be in high demand, observing an 83% clearance rate for the 1,678 head offered. The category averaged $270, increasing $46/head.

Merino wethers had the highest number of listings for the week at 8,689 head, but despite supplies decreasing on last week, demand was also weaker, with only a 49% clearance rate achieved.

The category saw a $2 decrease for the second consecutive week to average $133/head. Merino ewe lambs maintained a healthy clearance rate of 67% for the 1,845 head offered, while decreasing $12 on last week, to average $187/head.

The joined ewe offering halved, with only 13,627 head listed, however, an increase in prices was observed across three-out-of-six categories – highlighted by the SIL shedding breeds.

The category recorded a strong clearance rate of 95% for the 1,640 head offered to average $480, up $84/head on last week. Prices for this category jumped largely due to a run of 41 Australian Whites, selling for an unprecedented $988 – breaking the AuctionsPlus record by over $300/head.

These SIL ewe lambs were 10-11 months old, averaged just over 57kg and were joined to Tattykeel Australian White stud rams.

SM shedding breeds continue to be highly sought after, with the total offering managing to secure a buyer. Despite the offering halving on the previous week, prices softened to average $301/head.

NSM lines climbed in value, with only one category reporting cheaper trends. First cross ewes decreased by $39 to average $253/head, with only a 44% clearance rate for the 857 head offered.