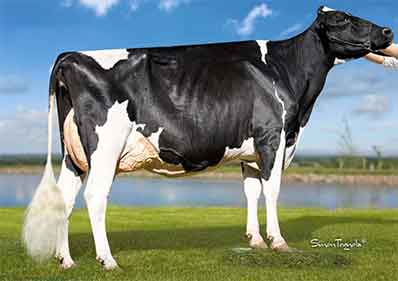 The Queensland region of Holstein Australia have announced the winner of the 2021 QLD Cow of the Year.

The title has been awarded to Ardylbar Atwood Gracie-ET VG87 who was exhibited by the Barron family of Ardylbar Holsteins from Coombooya in SE Queensland.

“Her overall chest width and depth of fore rib and rear rib, her fullness and her attached fore udder and her pin width that flows down into her rear udder and the way the mammary system is attached on the body wall was just outstanding” said Mr Kelly.

This is the second year in a row that the Barron family have won the QLD Cow of the Year competition.

“We were really surprised and we are very happy with the way Grandma Graceful has bred” said Sheryl Barron.

Gracie has collected a handful of show ring titles this year winning first place in the 5 to 7 year old in-milk class, Best Udder and named Champion Cow at the 2021 Toowoomba Show.

Holstein Australia QLD Region Secretary Diane Reeves said “I would like to thank those members who entered this year’s Competition and particularly the exhibitors from North Qld who are always willing to support the Breed”.