Eliminating catch and drag to save on shearer and sheep injury 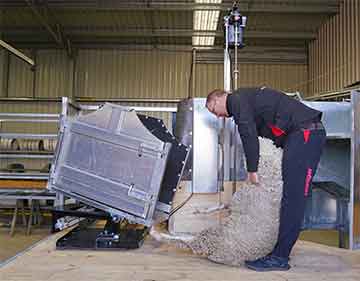 As part of a new AWI project, a mechanical system is under development that delivers the sheep to the shearer, thereby eliminating the catch and drag from the pen. This minimises the chance of injury to the shearer and the sheep whilst also maximising productivity with significantly reduced handling times.

“These negative impacts of the catch and drag are the motivation behind a new AWI project that is developing an alternative system in which sheep are delivered from a race directly to the shearer,” said AWI CEO Stuart McCullough.

“Significantly, the new system will not only eliminate the time and energy that shearers spend having to walk to the pen, catch a sheep and drag it back to the shearing stand, but it also minimises the chance of injury to the shearer from the dragging and twisting movements.”

Overall, the AWI-funded project aims to produce a design for the workplace that:

The project is the brainchild of AWI’s Stephen Feighan and SCAA Training’s Glenn Haynes and is progressing well under the guidance of a number highly experienced AWI Shearer Trainers – Shannon Warnest, Paul Oster and Wayne Hosie – all of whom are renowned shearers and have considerable hands-on experience in sheds and on other shearing race delivery systems across the world. They know the practicalities of what works and what doesn’t.

The design focuses on a ‘modular’ concept in which portable singular shearing stands can be joined together to make a multi-stand shearing platform, which can be stored away after use. Added design elements will allow for straight board or U-shape configuration.

Former world champion shearer Shannon Warnest, who initially came up with the tilting delivery unit concept, said: “Everyone involved in this project is rapt with the progress. We’ve also made sure to get feedback from a number of other practical, experienced shearers and some growers who are looking to upgrade their sheds.

“We’ve had a few people shaking their head when they first see it – but not for long.”

Stuart added: “This is an additional harvesting option, especially suitable for woolgrowers that might have been planning to renovate an old shearing shed or build a new a multi-purpose shed.

“Building a brand-new shed is a big undertaking, in terms of cost, time and energy, especially when it’s often only used for a few weeks of the year. A portable, modular system could be cheaper and easier – and by eliminating the catch and drag from the pen it also provides a more efficient and safe environment for the shearer.

“It’s vital for the future of wool-growing industry that harvesting workplaces have a modern environment, such as this, to attract workers into the industry and retain the current workforce.”