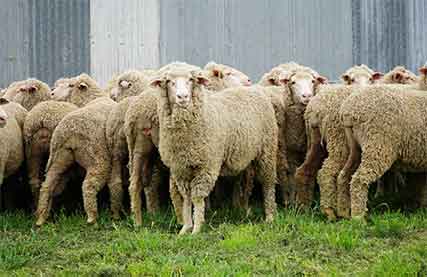 A new record high for commercial Merino ewe lambs was set last week, with the top line of the category returning $398/head liveweight for the  of 89 future breeder ewe lambs of Mumblebone blood from Wuuluman, NSW.

The ewe lambs (pictured) aged 12-13 months weighed 54.2kg liveweight at assessment, with 2-3” wool and were purchased by a buyer from Trunkey Creek, Central West NSW.

Crossbred lambs accounted for 28% of the total offering last week, with 37,536 head offered – up 13% from the previous week.

The increased offering for the category was well supported, as clearance rates increased to 96%, while the category averaged $8 higher, at $172/head liveweight.

Merino wether lambs registered a considerable contraction in numbers – back 31% to total 28,620 head.

The tighter offering for the category saw prices increase by $5, to average $143/head – while clearance rates increased considerably to 92%, as many buyers had renewed confidence following recent rainfall during the critical spring period.

The joined ewe offering saw mixed results for both price and clearance rates across the various categories this week. SIL Merino ewe numbers increased by 75% from last week, with the category averaging $299/head – up $46. Despite higher returns this week, clearance rates dipped to 49%, indicative of demand for quality breeding lines by restockers.

SIL Composite/other breed ewes also saw a large increase in the offering, with 2,634 head catalogued – which registered a 100% clearance rate. Prices for the category declined significantly however, with the average back $71, at $268/head.

Non-station mated lines registered a drop in prices across all categories, with low clearance rates an indication of buyers sourcing quality through the offering.