Italian buyers active on non-mulesed and certified to integrity lots 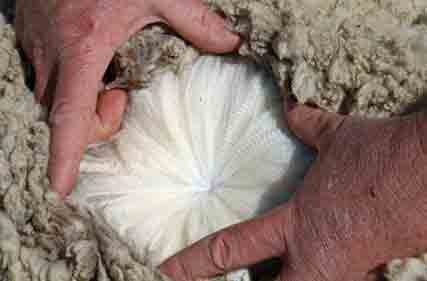 The AWEX EMI closed on 1360c – up 14c for the week at auction sales in Australia.
The EMI has risen 36c over the last 4 consecutive weeks which coincides with the Foreign Exchange AUD/USD movement of 4c (74.20c down to 70.10) over the same time period and the EMI in USD terms has risen just 9c.
Last week’s 37,013 bale offering was met with widespread competition effecting higher prices across all wool types in every centre. 93.1% of the offering was cleared to the trade and 4.4% of the offering was withdrawn from sale before the start.

Exporters were responding to business for delivery in the New Year as the prompt purchases for immediate delivery window has closed. Wool forward mechanism followed the spot prices up and the bidders were at or slightly above cash out into 2022, signalling improved confidence in economic recoveries in our major markets.
Merino Fleece lead the way in price increases from the first lot this week with the northern Merino 16.5-17.5μ MPG’s adding 30-31c, followed by 18-19μ MPG’s which added 17-23c and the 19.5–21μ MPG’s which added 6-13c.

Merino Skirtings could almost be described as bullish and the spirited bidding signalled demand for almost all skirting types. The superfine FNF types were aggressively sought by China and European interests especially lots bearing NM and Integrity schemes.

Crossbreds had a better week with some clear upward movements experienced. Rises between 4-14c in the northern region whilst the southern region increase between 0 and 31c.

Merino Cardings saw keen interest for Stains and Lambs, pushing the MC indices up an average of 12c with the northern region increasing 15c. XB oddments were also slightly better with the cut off for buyer support still 26.5 to 27 Micron.

Reports that the final selling week should be similar to the current week’s results for the majority of the micron categories.

The crossbred market may come under question again in the New Year, whilst it is widely felt that the Merino markets will continue to remain positive if the Chinese Australian Political relationship continues to be amicable. Exporters are reporting more orders emerging from countries outside of China.

Next week is the final sale of this calendar year and the last before the annual three-week Christmas recess and the last opportunity to sell before Christmas. The national offering of 42,306 bales being offered in Sydney, Melbourne and Fremantle.

To all of our clients and their families harvesting, please stay safe.