Shipping and dumping delays puts pressure on exporters and processors 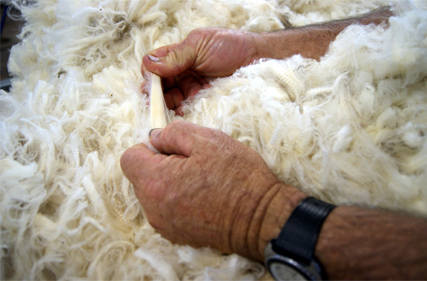 Increased pressure from the shipping and dumping delays have accrued a huge financial burden on the majority of the exporters and processors.

The AWEX EMI closed on 1427c – up 26c at auction sales in Australia this week. The 41,298 bale offering enjoyed a very healthy 91% clearance rate, with Sydney’s 94.3% clearance well ahead of the other centres.

Strong competition came from a wide range of exporters this week and while the large Australian Trading companies dominated the buyers list, they were pushed by the major Chinese Topmakers and the indent buyers for China and Europe.

The top 7 buyers accounted for over 60% of the total weekly purchases. The continuing weaker trend in the AUD against the USD and Euro correlated with the increased prices recorded in the wool market and demonstrated the solid demand from our major markets despite the shipping logistic and financial challenges that have become the new normal around the world.

Merino Fleece opened the week with bullish competition who were capitalising on the lower Forex with the US and Euro currencies.

The largest weekly rises were measured in the 17-18.5 MPG’s increasing by 52-69c whilst the more moderate rises of 8-17c were recorded in the 19 and coarser MPG’s. Competition was more evident on the best classed, specified and style lots with low VM however if it was under 18.5μ regardless of the style and specifications, the prices were somewhat extraordinary.

The smaller offering on Wednesday saw selected types increase up to 30c for the day.

Merino Skirtings opened the week adding solid rises on Tuesday, adding 10-20c with Wednesday’s market consolidating the early rises with selected lots adding another 10c on Wednesday. Despite the slightly better prices this week, the current levels remain historically low in this sector.

Crossbreds saw some selective buying of the smallest offerings for the season. 30% of the northern region crossbred lots were previously offered which is not a good start to the week. The small selection of suitable types for the orders were cherry picked by the traders and Chinese indent buyers.

Merino Cardings opened the week with good competition on locks and crutchings which added 10-20c on Tuesday. This continued into Wednesday with locks adding another 20-30c and crutchings increasing by another 10c.

Crossbred oddments continued to suffer in a week where almost all other categories were positive. There is no emerging positive news on the horizon in this sector.

With current selling season entering the last two months before the three week sale recess, it may be time to think about the Spring 22 price levels in the context of some risk management.

Forward prices transacted in the Spring at 2% under the cash across most MPG’s. As the week progressed, bids were scant for the spring after the transactions traded on Wednesday and Thursday in September to November 22 and one contract transacted on Friday for January ‘23 at 1700c.

Whilst this week took its rises from the currency exchange gains, the scope for much movement is USD seems to have stalled for the time being.

Increased pressure from the shipping and dumping delays have accrued a huge financial burden on the majority of the exporters and processors. As I mentioned in the past few reports, the only way for processors to meet their downstream demand may be to revert back to a “Just in case inventory position” rather than maintain the “Just in time inventory position’ that has been in place for the past decade or two.

This week’s national offering moves back up to 46,129 bales. The major increase in the offering is in the Southern region Crossbred offering. The early market intelligence for merino combing and carding wool is no change however all eyes will be on the crossbred market movements.

This week’s rain in the eastern states will no doubt slow shearing up temporarily and this could bring some relief to the financial pressures we have been reporting over the past two months.
~ Marty Moses