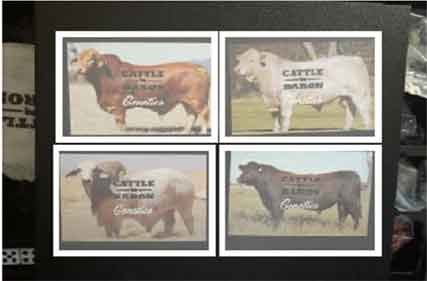 To commemorate the 50th Anniversary of Simmentals in Australia, Simmental Australia have organised a special edition of the Cattle Baron board game to be produced.

Cattle Baron is Australia’s only cattle industry board game and puts players in charge of their own Australian cattle property.

Simmental Australia intends to have 500 copies of the Board Game ordered, and labelled with the 50th Anniversary logo.

As part of the game, each player owns their own cattle property or stud. Members are invited to bid for the opportunity to have one of the properties labelled with their stud name, with an image of their stud name and logo printed on the game board.

The four property photos (provided by ASBA) will showcase the versatility of the breed with Traditional, Red, Black and Simbrahs.

There is also the opportunity to have your logo on the bull cards, again showcasing the four breed registers with photos provided by ASBA and with your logo.

In total there are 8 opportunities to be branded, limited to one per member.
These spots will be auctioned with more information to come with a bid link.

Elite Livestock Auctions have kindly sponsored this auction of the Board spaces and Bull cards. Bidding closes at 2pm Friday 27th August.