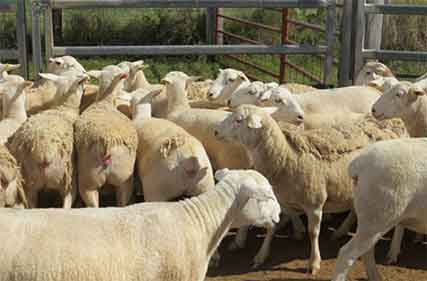 These SIL Ultra White/Dorper ewes from Bingara, NSW, sold for $300.

SIL Composite/other breed ewes had a total offering of 3,775 head last week, which reached a 91% clearance and prices rose $18 to take back the previous weeks contraction, averaging $288/head.

Crossbred lambs had the largest offering across the categories, with 11,621 head. Prices eased $2 to average $160/head, with clearance rates for the category remaining robust at 72%.

A highlight for the category included a line of 700 mixed sex White Suffolk/Poll Merino lambs weighing 41kg lwt from Bornholm, WA – which returned $143/head and will travel interstate to Loxton, SA.

The national sheep sale had a total of 19,317 head listed across 72 catalogued lots this week, which consisted mainly of joined ewes. Upon closure of the sale clearance rates reached a healthy 73%, while mixed price averages and reduced numbers across all categories resulted in no clear trends across the sheep market.

Merino wethers eased considerably on last week – back $40 to average $111/head. The offering of 2,140 head was met with steady demand, as quality offerings prevailed in the purchases, with clearance rates reaching 57%.

SIL Merino ewes held firm on last week with a total of 5,102 head listed, with the category recording a 56% clearance. Prices rose by $8 to average $229/head.

Following a $51 contraction, SIL first cross ewes took back their losses last week, rising $65 to average $307/head. The offering increased by over 2,000 head, to total 4,547 head, which was well received from a buying end as clearance rates rose by 40% to reach 73%.