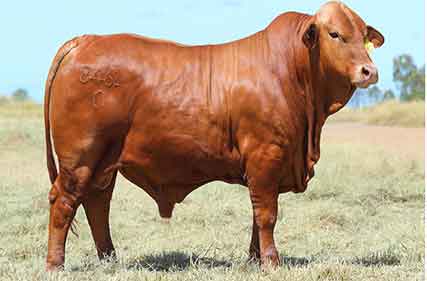 On offer were 47 bulls from Darren and Helen Childs, Glenlands D prefix, Theodore and 25 catalogued from the Eddington Stud, Julia Creek operated by Anthony and Rachael Anderson.

Apart from the quality on offer, the immediate effects of recent widespread rain in the north and central west of the state and continual strength of all cattle markets helped cement the result.

In all 37 addresses representing online and those that physically attended the fixture took bulls to destinations across Queensland and the NT.

Jim and Betty Brown, Mayfield Station, Duchess took with them eight Droughtmasters from both stables for an average outlay of $11,125 to top at $14,000. The Clermont based, Bassalt River Pastoral Company, Huntly Station signed off on five to a top of $22,000 for an average of $14,200. Their $22,000 selection was a two-year-old poll by Glenlands Thor.

The Hawkins family, HC Pastoral, Toowoomba selected two for a $14,000 average topping at $18,000 for another of the PP entries by Glenlands D Utube. Yet another of the Utube sons sold for $20,000 to the Fegan family, Milgery, McKinlay who purchased two to average $16,000.