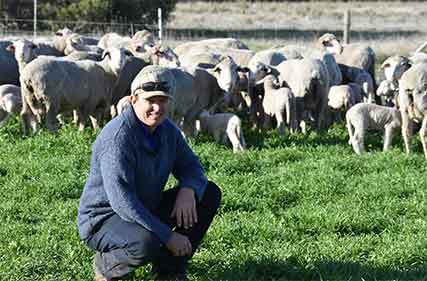 Ten of the 12 studs under the SRS Genetics banner have contributed young sires to Australian Merino Sire Evaluation trials and the Meat and Livestock Australia Resource Flock at sites in NSW, Victoria, South Australia and Western Australia.

SRS Genetics chairman Norm Smith said members were keen to carry on the legacy of SRS founder, the late Dr Jim Watts, who had encouraged breeders to benchmark their flock in the industry to generate accuracy and repeatability in breeding values.

“Dr Watts was a big believer in fat and muscle, and the importance of that to the Merino, and was a great advocate of benchmarking SRS sheep so the studs have been encouraged to create those linkages to the rest of the Merino industry,” Mr Smith said.

“Breeding values are an important tool for Merino breeders and the more accurate and repeatable we can make those, the more value they have to the commercial clients.”

Within the SRS Group, they too are benchmarking with their own sire evaluation program.

“The value of the program is improving the accuracy of those rams over a range of environments and creating linkages within flocks, proving to be a valuable tool for stud breeders,” he said.

“All three rams in the 2022 Young Sire Program are also in Merino Sire Evaluation trials around the country, adding another layer of linkages.”

An SRS Genetics panel selects the rams on visual indicators of density and length, along with conformation and breeding values for a range of traits including growth, muscle and fat.

This year, 2020-drop progeny by their “industry curve-bender” sire in the Balmoral Breeders Merino Sire Evaluation Trial ranked the highest for post weaning greasy and clean fleece weight and low body wrinkle, along with above average adult fibre diameter coefficient of variation and staple length.

The progeny was above average for flock breeding values for yearling weight, and all production indexes.

“The ram achieved the fleece weight through density and staple length which has always been the aim of the SRS system, and ranked highly for growth, fat and muscle,” Mr Hooke said.

“Based on the yearling data, he is sitting at top five per cent in the reproduction traits.

“This has allowed us to push the carcase and reproduction traits while progressing wool quality and quantity. The benchmarking is hugely powerful if we have a product which can stand up in the market, we have to ensure we are in the mix and in front of whole of industry.”

South Australian breeders Stephen and Peta Kellock, Kelvale Poll Merinos, Keith, have participated in five of the past six South Australian Merino Sire evaluation trials and have a young sire entered for the 2022 drop.

In the trial’s 2019 drop yearling and adult assessment, progeny of Kelvale Poll 170004 were above average for yearling fibre diameter coefficient of variation and eye muscle depth, and the leader for staple length.

The trial was held at Lameroo using a flock of 20 micron ewes inseminated to 16 industry rams including three link sires.

Mr Kellock said the stud switched to an SRS system to lower micron, improve handle, and move to a softer, better type of wool.

“The trials were one way for us to benchmark against the whole industry. They have been beneficial as far as creating opportunities to obtain sire linkages,” he said.

The Kelvale flock has been non-mulesed since 2007, is on the cusp of Responsible Wool Standard certification and among the country’s top flocks for staple length.

“Our sires have been at the top end of number of lambs in the trials, and we put that down to selection for positive fat and muscle, or survivability,” Mr Kellock said.

“We shear every six months – at the last shearing we didn’t have any lines below 70mm and one up to 87mm.”

Barega Merinos have contributed sires artificially to the Meat and Livestock Australia Resource flock 2019 and 2021 joinings.

“It’s about developing better linkages for your animal with the breeding values of the traits you are after, and we have noticed the carcase breeding values for our 2021 sire have increased. That fat breeding value is hidden gold,” Ms Saunders said.

“Lamb survivability at the ultrafine end has been around 90-95 per cent from joining to lambing after coming from a pre-SRS base in the low 80 per cent.

“There is no pin wrinkle with the skin soft and pliable with long bundles of wool, and I was staggered how wrinkle can be bred out within a few generations. The wool fibres are aligned so there is no fleece rot and the animals dry quickly and yield well.

Queensland breeders Mark and Vicki Murphy, Karbullah Merinos, Goondiwindi, have contributed semen from young SRS sires to be used artificially within the Meat and Livestock Australia Resource flock at Armidale over the years, and have nominated a sire for the 2022 intake.

“The biggest benefit is accuracy of data, having faith in what we are doing and producing, while the good linkages and high accuracy enables us to improve the quality of our own data,” Mr Murphy said.

“As a group, SRS Genetics want to be compared to the industry and show our sheep are ticking boxes to make the dollar come back to the front gate,” Mrs Murphy added.

“It’s a power of numbers with almost all SRS Genetics studs participating in sire evaluation trials across Australia in 2022. It’s a big financial commitment and stud breeders are putting dollars behind benchmarking their progeny.”