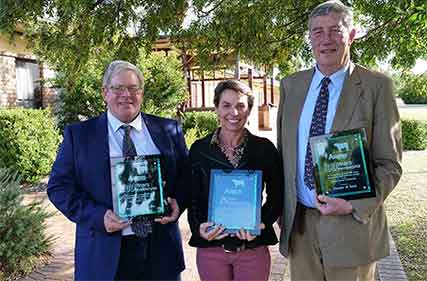 The 103rd Annual General Meeting of the Angus Society of Australia in Armidale on May 26, was the backdrop for the presentation of three major membership awards to Bald Blair Angus, Guyra NSW and Forster & Sons, Abington NSW for 100 years of membership and Ben Nevis Grazing, Walcha for 75 years membership.

‘It is a testament to the strength, leadership and dedication of these families and the legacy that they have left behind that sees their descendants serving as breed leaders in the Angus leaders in breed today.’

‘The foresight, determination and the faith that these pioneers had in the Angus breed, has ensured that the future of the breed and the custodianship of the land and the cattle continues to be in great hands throughout each generation.’

While the Society was officially formed on May 9, 1919, the first recorded list of members was recorded in July 1922 and included F.J White and Sons of Bald Blair and Norman Forster, Abington, both considered prominent pioneers of the Angus breed, among the 14 members (or families) on the record.

The Bald Blair legacy dates back to 1898 when the Whites purchased Bald Blair, with the Angus stud running since 1908, making it one of the oldest angus studs in Australia.

Colonel Harold F (HF) White from Bald Blair became the longest serving President in the role for a decade from April 1927 to March 1937, after he succeeded his uncle James Cobb White, Edinglassie, whom was the first President of the Society from 1919 to 1927.

In his day, Colonel White was one of the most influential breeders of Aberdeen-Angus cattle due to his show ring and performance cattle.

He is also hailed as one of the leading pioneers of performance recording for Aberdeen-Angus cattle. The White Family over the course of 100 years have continued to be prominent figures within both the Society and the Angus breed.

Colonel White’s sons Richard and Graham White presided as President for the periods of 1968 to 1969, and 1996 – 1997 respectively, with Sam White, the current custodian of Bald Blair Angus having just finished his term as President from 2020 to 2022.

Norman Forster was the society President from 1939-1941. As a producer, Forster and his family were among those who invested in Aberdeen Angus bulls and heifers from New Zealand starting the Abington herd in 1918.

Forster regarded the formation of the Society as a crucial step in the breeds development in Australia and left an invaluable to the breed through his dedication to both the Society and the breed. He foresaw great potential for the breed to spread to every corner of Australia and no doubt would take great pride in the influence the Angus breed now has o the beef industry.

Both Colonel White and Forster were among buyers of the United Kingdom society’s first shipment of bulls in 1927.

While the Abington stud was dispersed in 1950, Angus cattle have remained a large part of Abington station and the membership of Forster & Sons with the Society continued, with James Richard Forster Harris at the helm.

Today both Bald Blair and Abington are still active members of the beef industry and have continued the success of the Angus breed on their properties through the ever-evolving improvements in beef cattle production.

For Ben Nevis Angus, while Angus have been part of the family since 1902 it wasn’t until Bruce Steel (Ben Nevis Founder) went underage at 16 to World War II where his commanding officer, HG Munro of Booroomooka inspired him to start an Angus Stud. Something he did with his father in 1947 based on Abington bloodlines.

The Angus breed became a whole way of life, and today Ben Nevis is a fourth-generation family business with all the family involved including Bruce’s wife Cherry, daughter Kylie Steel and granddaughter Bonnie Cox and daughter Erica Halliday, son in law Stuart Halliday and grandchildren Jack and Maggie Halliday.

Bruce and Cherry were both considered an inspiration and mentors to many Angus breeders and were instrumental in the development of the Angus Youth National Roundup as we know it today and served on a myriad of Angus committees including, the Angus Australia board, the NSW State Committee and the New England Angus breeders group.