Polled homozygous Holstein sire sells out before his release 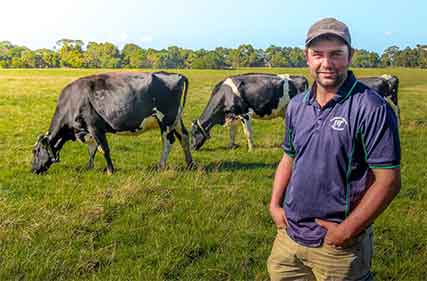 Toora, Victoria Holstein breeder Mitchell Jones loves the consistency of ABS JERONIMO-P daughters. His family have two of the highest-ranking JERONIMO-P genomic females in their milking herd of 700 cows.

Australian dairy farmers are jumping at the chance to breed from the country’s best true polled – homozygous – Holstein sire, with semen selling out before he’s released.

The popularity of this ABS young sire, 29HO20629 TTM ELLIS-PP, comes as the number one proven Holstein sire, 29HO18698 ABS JERONIMO-P, continues his run at the top of the recently announced Australian Breeding Values (ABV) rankings.

This ABV release also revealed that JERONIMO-P, with a Balanced Performance Index (BPI) of 535, has sired 28 per cent of Australia’s top 100 dairy females.

For ABS Australian Business Operations Manager Bruce Ronalds, confirmation of JERONIMO-P’s dominance is proof of the strong health and production traits he’s delivering on-farm. “JERONIMO-P is all about reliability, stability and profitability. He’s retained his top spot with 288 daughters milking in Australian herds and the addition of 33 daughters to his proof since last year,” Mr Ronalds said.

“Add to that, 86 per cent of his daughters classified for their dairy type by Holstein Australia have been assessed as ‘Good-Plus’ or better. JERONIMO-P is breeding functional and profitable cows. For the past 12 months he’s consistently produced 30-44 per cent of the country’s top Holstein females. No wonder he’s our biggest selling sire in the Australian market.”

Toora, Victoria breeder, Mitchell Jones, and his family are milking three of the top females sired by JERONIMO-P. These include the number one genomic female V4 Jernimy at 578 BPI and number seven V2 Jeronimo Tiffany 527 BPI. These daughters have Production Indexes (PI) in the top three per cent of the Jones’ Cypress Grove Holstein herd. As two-year-olds, these two JERONIMO-P daughters are classified 82 points.

“The ranking of these genomic sires is proof of the speed of genetic gain in the dairy industry and how easy it is to improve the value of your herd, thanks to short generation intervals,” Mr Ronalds said.

“Using the latest technology to source the best up-and-coming sires, while chasing milk records of daughters to develop proven bull proofs, is how ABS ensures it offers farmers quality and diversity for their breeding programs.” As for ELLIS-PP, Mr Ronalds said the elite health trait, low mastitis and long teat length sire is in such hot demand that pre-ordering semen is essential.

ABS has five of the top 10 genomic Jerseys according to the latest ABV rankings. While this domination at the top of the breed indices is nothing new, for the first time, there’s been strong offshore interest for these genetics.

It’s the same for fellow top-ranked Gippsland-bred bull Ranleigh SKYWARD (CSCSKYWARD) and Brookbora BUSHFIELD-P (CSCBUSHFIELD) hailing from northern Victoria. “All three of these sires offer milk with components while adding strength and capacity to a herd,” Mr Ronalds said. “Like Australian breeders, our overseas counterparts also want chest width and deeper bodies in their Jerseys and that’s what these bulls deliver.”

With nine of the top 10 highest ranking daughter fertility Red bulls and the top three Australian Selection Index (ASI) sires, ABS is delivering health, welfare and profitability to Australian dairy farmers. Add to this, the top three genomic PP, true polled homozygous, Reds and every base is covered.

Available in ABS’ sexed genetic product REDX™ or as conventional semen, Mr Ronalds said this sire offering has something for avid breeders who are looking to inject some of the health traits that the Reds are famous for.

Long-time popular proven Red 252NR11819 ONSTAD-P continues to shine at 347 BPI, while ABS is working overtime to get new outcross sire 252NR11919 OFSTAD-P onto the Australian ABV list. OFSTAD-P is currently sitting at the top of the Red breed Interbull list – a ranking of global sires – while ABS collects data on his performance locally so he can achieve a full Australian daughter proof.