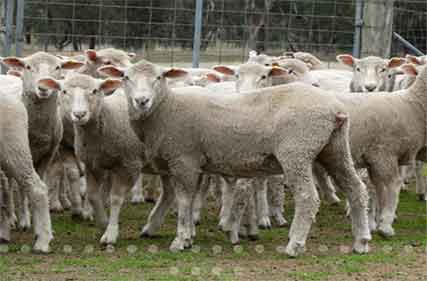 These first cross ewe lambs from Glenellen, NSW, sold for $202.

The largest lamb category for the week was crossbreds, with 15,928 head offered. The 55% clearance rate at the immediate conclusion of Tuesdays sale, lifted to 69%, as prices averaged $6 higher on the previous week, at $147/head.

A line of 500 White Suffolk/Merino mixed sex lambs weighing 46kg lwt from Canowindra, NSW, returned the top price for the category at $188/head.

Both Merino lamb categories took a step back this week, with wether lambs down $7 on last week, at $124/head, while ewe lambs slipped $29 lower, to $203/head. From Kiata, Victoria a line Aug/Sep ’21 drop Poll Merino wether lambs weighing 52kg lwt returned $160/head and will travel to Bordertown, SA.

It was a very mixed breeding ewe market, with some low clearance rates and price falls through the smaller, populated lines.

SIL first cross ewes slipped $2 lower at the closure of the sale, averaging $332 – with the subdued 38% clearance rate at the immediate end of the auction lifting to 54% by late Thursday, with a total of 9,059 head presented.