Herefords set Dubbo alight with a National top of $120,000 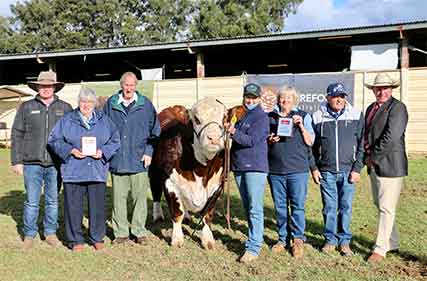 Prices leapt into the stratosphere at the 2022 Herefords Australia National Sale at Dubbo on June 7, punching out a new record top of $120,000.

A total of 12 existing and three new vendors from NSW and Queensland offered 50 polled bulls and 14 females at the event which was interfaced with AuctionsPlus and drew 79 registered bidders.

Vendors Greg and Del Rees, The Ranch, Tomingley, were over the moon with excitement to create a new top price of $120,000 for their grand champion bull, The Ranch Remington R028.

Mr Lyons confirmed there had already been plenty of semen interest in the bull.

The October 2020 drop bull had a low birthweight combined with milk of +17kg, and +3.9sqcm eye muscle area.

Other buyers on the day included Round Mount Poll Herefords, Mudgee, buying Llandillo Russia R121 for $14,000 and the NSW Department of Primary Industries paid $12,000 for Callaway 173D Streaker S009.

Mr Quirk had been in inactive Hereford breeder for 24 years and has returned to the fold to form a stud herd.

“I thought the four heifers were a great line, very even, true to type and they will be the platform for the stud herd,” Mr Quirk said.

“For Greg and Del Rees to be rewarded with $120,000 was a big tick for their program, and showed other studs are watching them,” Mr Settree said.

“We had commercial buyers from Warren, Nyngan, Dubbo and Wellington, and bulls sold into Queensland, Victoria, Tasmania and South Australia.

“New vendors Valley View Poll Herefords averaged $24,000 for their bulls, and all three of the new vendors indicated they will be back.”

“Considering three years ago there was a lot of people saying the sale wouldn’t continue, we have definitely figured out we have a place in the industry,” Mr Rayner said.