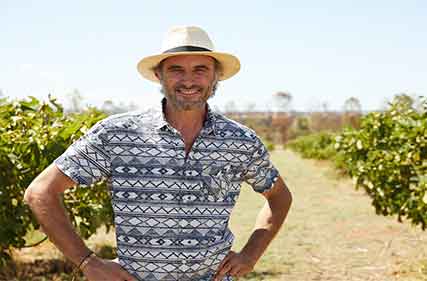 Rosnay Wines farmer Sam Stratham, based in Canowindra, grows 20 hectares of vineyards as well as olives and figs.

Albury will host the 2022 National Renewables in Agriculture Conference and Expo this August as interest in on-farm renewable energy explodes amid skyrocketing electricity prices.

The Conference, in its third year, is the only event that brings people interested in energy and farming together in the same place.

Hundreds of people are expected to attend to hear stories directly from farmers who have switched to renewables.

Expert speakers will outline the future of farming utilising growing industries such as hydrogen, electric vehicles and battery storage.

There will also be robust panel discussions on electric farm equipment, with topics such as how will tractors will be rapidly charged during harvest and what happens to batteries if equipment isn’t used for months at a time.

Credible suppliers will also be at the event to speak directly with farmers about opportunities on their farm.

Conference founder and Farm Renewables Consulting Director Karin Stark said the strong line-up of speakers this year included Dominic Murphy from Meredith Dairy who uses bioenergy through a wood-fired gasifier to reduce their reliance on the grid by 70 per cent.

“We also have farmers who have increased the carrying capacity of their farms by grazing sheep under solar panels and farmers who were 90 per cent self-sufficient in fuels by growing their own seed oils.

“It is incredibly exciting and as we confront the reality of energy costs surging globally, there has never been a better time to talk about the benefits of embracing the renewable energy transition.

“As the world moves to net zero, there will be pressure on farmers to show how they are actively reducing emissions and the learnings from the Conference show how farmers can make the most of these opportunities.”

Dubbo sheep farmer Tom Warren said hosting a 20MW solar farm was a great opportunity for me to supplement my agricultural income.

“I was very keen from the outset that I would get the opportunity to graze my merino sheep beneath the panels. The company agreed and it’s been a win-win ever since.”

Rosnay Wines farmer Sam Stratham, based in Canowindra, grows 20 hectares of vineyards as well as olives and figs.

“We installed solar and four 10kW flow batteries to help power operations at the winery.

“One of our biggest motivators was improving the energy security on the farm and the solar and batters have enabled us to do more processing on site while keeping costs down. Previously we were using a very old single phase supply from the grid which was pretty unreliable.”

Gaia Enviro Tech Co-founder and Chair Elizabeth Lewis-Gray said bioenergy is a significant component of the renewable energy mix in Europe today and is intrinsically linked to their agricultural sector, making up around 50 per cent of the total renewable energy generated.

“Australia also has significant agriculture production and processing capacity. This sector provides an important organic waste resource, particularly when combined with FOGO waste that is able to deliver great environmental outcomes such as a ‘negative’ carbon footprint.

“Gaia EnviroTech has made substantial investment in the development of modular AD systems to deliver energy from organic waste from agricultural, council and food manufacturing waste at a local level.”

The National Renewables in Agriculture Conference and Expo will be held at Albury Entertainment Centre on Thursday 18 August 2022.

A field trip to a solar farm grazing sheep under panels and a piggery using bioenergy is planned for the following day but seats on the bus are limited.

Tickets can be purchased at https://www.renewablesinagconference.com.au