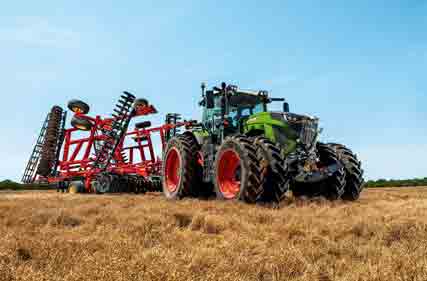 ABARES’ latest Agricultural Commodities Report predicts the industry’s gross value will tip past $80 billion for a second consecutive year on the back of favourable weather conditions and “very high” world food prices, but Ms Simson said these figures don’t paint the full picture.

Ms Simson warned that despite the bumper season, many farmers were feeling the pain of eye-watering production costs.

“Prices for fertiliser, fuel and power are on a rocket ride to the moon,” Ms Simson said.

“As ABARES points out, producers are dealing with the highest fertiliser prices since 2008, as the global energy crisis takes its toll.

“Of course, all this is compounded by the ongoing worker shortage putting the handbrake on production, an issue that will only worsen later in the year during the crucial harvest period.”

Ms Simson was on-farm in regional Queensland today, hosting the new Minister for Agriculture Murray Watt as he spoke firsthand to farmers and agricultural businesses.

She said while not all these issues were within the Government’s control, it was critical the Albanese Government worked closely with industry to limit the impact of the cost crunch.

“We raised these issues with Minister Watt today and discussed how we can work together on cost of farming issues, as we look to mitigate the flow-on impacts to everyday Australians.”

Ms Simson acknowledged that despite the challenges, today’s figures showed the farm sector was tracking well towards its target of $100 billion in farm gate output by 2030.

“Another $80 billion year means we are well on the way to achieving our goal to be a $100 billion industry by 2030, but now is the time to ensure we’re ready for when seasons and markets inevitably turn,” Ms Simson said.

Land values (source: Rural Bank)
• The median price per hectare of Australian farmland increased by 20 per cent in 2021 to $7,087 per hectare. This was the largest year-on-year increase in dollar terms in the last 27 years and the largest rise in percentage terms since 2005.
• Land values impact annual costs such as council rates.