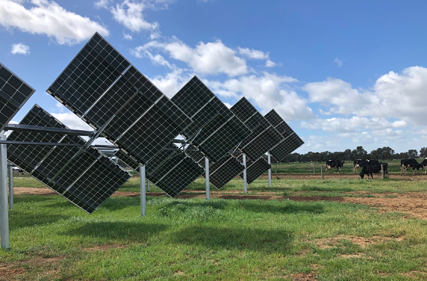 Farmers For Climate Action has welcomed the New South Wales Government’s announcement of a major investment in renewable energy.

“Like all energy consumers, New South Wales farmers have been facing some of the highest electricity prices in the National Energy Market,” Farmers For Climate Action CEO Fiona Davis said.

“This investment in the cheapest electricity source – renewable energy – is good news for farmers’ bottom lines and for emissions.”

Dr Davis said renewable energy infrastructure would be a huge opportunity for farming communities, with up to 2,700 jobs expected to be created in regional areas.

“This clearly shows that if we act quickly on climate change, there are huge economic opportunities for farmers and regional Australians,” she said.

For example, one New South Wales farmer who has already benefited from solar panels in his business is Justin Jarrett, a wine grower in Orange.

“Farmers are on the front lines of climate change,” Dr Davis said. “Farmers like Justin are showing that agriculture is ready and able to lead the response to climate change, and reaping the rewards, including by switching to renewables.”

Dr Davis said that by supporting the rollout of more renewable energy, NSW would lock in lower energy prices for more customers into the future, as unreliable coal power stations are retired.