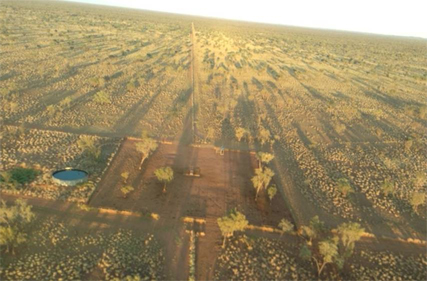 Grazing time is extended to 35 days in the larger paddocks, depending on the amount of feed and cattle behaviour.

A line of 465 one-mark feeder steers has been sold for an on-farm price of 330c/kg to Thomas Foods International by the Cadzow family, Mt Riddock Station, in the Northern Territory.

The steers weighed an average of 424kg and were freighted over 1300km to the Winderibby Feedlot in South Australia.

The 2600 square kilometre station, 200km north east of Alice Springs, runs a cow herd of 4500-5000 and is managed by Steve and Rebecca Cadzow

Steers and surplus heifers (milk and two teeth) are usually finished on natural pastures to 420-460kg and sold to Winderibby Feedlot, SA, and Riverina Beef at Yanco, NSW.

The couple introduced a remote livestock management system last year to work in conjunction with a rotational grazing program.

An automatic weigh and drafting machine is an essential component.

“The system is a combination of hardware and software using telemetry to identify, weigh and draft individual animals when they drink from a watering point,’’ she said.

“Cattle are trained to present themselves to the system for recording then returned to the paddock – unless they are ready for market, in which case a drafting gate sends them another way to await collection by the stock transporter.

“This enables producers to monitor individual cattle whenever they drink and carry out a range of management actions such as mustering, drafting, monitoring calving rates and fertility, controlling access to feed supplements and most importantly, tracking animal growth rates to determine optimum sale times.’’

Stephen and Rebecca came across the technology at a field day several years ago and have developed a strong working relationship with the provider, Precision Pastoral Pty Ltd.

Mrs Cadzow said the $24,000 installation cost would be recouped within several years with liveweight savings during mustering and processing.

Mrs Cadzow said the management program aimed to have cattle in the paddocks for 21 days.

She said grazing time was extended to 35 days in the larger paddocks, depending on the amount of feed and cattle behaviour.

“Some signs indicating steers are ready to move include the creation of cattle pads and restlessness.

“To move the cattle, they are trapped through the central watering point, simply by closing one gate and opening another.

“We aim to sell a line of steers after they have reached a certain weight range, regardless of where they are in the rotation.

“Once steers have been sold out of the rotation we try as best we can to induct the same amount into the rotation to keep the numbers standard.

“When using this system, the profitability ratio is based on kilogram of dry matter intake versus kilograms of beef grown.’’