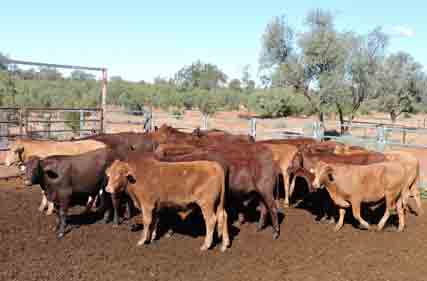 More rain through key regions helped to top up the frothing demand for young cattle, especially for the online heifer categories, as the increasingly wet winter in many southern regions has producers looking forward to spring.

Clearance rates through the young cattle lines were exceptional, exceeding 90% for half of the indicative categories.

At the heaviest end of the steer market, a line of 43 Santa Gertrudis feeder steers, out of Hungerford in western NSW, sold to $2,410/head – averaging 477/kg liveweight and between 12-19 month of age.

This line attracted plenty of bidder attention, boosted by the combination of size of the lot and plenty of potential weight gain.

Similarly, a line of 40 unweaned Angus steers, out of the NSW Northern Tablelands, sold to $1,455/head – averaging 206.5/kg liveweight and between 6-8 months of age.

Influenced by some exceptional lines of cattle, including a big result for eight heifers out of Tasmania, the two heaviest heifer categories jumped $13 and $116 on last week – with impressive clearance rates of 98% and 100%, respectively.