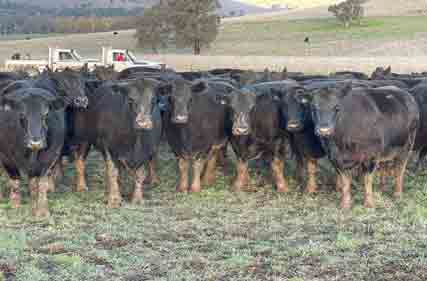 These Reiland blood Angus cows, PTIC, 685kg and five years, were sold by the Nicholls family, Gundagai, to a top of $3975.

Record high prices did little to dampen buyer enthusiasm for AuctionsPlus cattle sales, with clearance rates exceeding 95% for some of the largest steer and heifer categories.

The unrelenting surge in the young cattle market continued this week, as the EYCI cracked the 950’s.

The ability for the market to continue to trade at ever increasing levels is almost as fascinating as the actual prices received. In previous periods, as recent as November, January and April, the record levels reached in the market had been somewhat fleeting, with a quick 3-5% draw back in the following weeks.

Except for a thinly traded and mixed breed light category, the four heaviest young steer categories all increased this week – with clearance rates ranging from a near capacity 93-97%.

As part of a larger selection offered, 89 Santa Gertrudis steers from Kilkenny Pastoral Company at Aramac, western Queensland, sold to $1,970/head – averaging 351.1kg liveweight and between 10-14 months of age.

There was a significant drop in the number of young heifers offered this week, which in turn contributed to some very spirited bidding. The 831 head offered in the 280-330kg bracket sold to an 88% clearance rate, with the $233 jump in the average price, to $1,867/head putting it above the corresponding steer category.

While the clearance rate for the breeding lines this week did not match the exceptional young cattle rates, there was still very strong buyer interest.

From the breeding side of the market, an excellent line of 46 PTIC Simmental/Simbrah cows, out of Meandarra, Queensland, sold to $2,880/head – offered as part of a dispersal sale, the 3-year-old cows averaged 521.5kg liveweight.