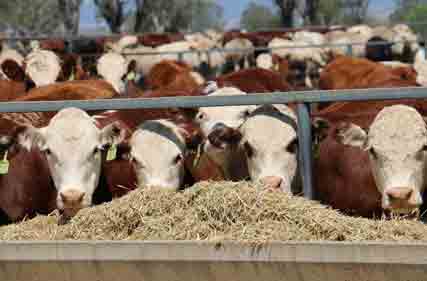 Producers aren’t the only ones paying high premiums for lighter cattle. For the week ending September 28, feedlots paid a record 643c/kg lwt for cattle weighing between 200–280kg (averaging 250kg).

This price was 76c higher than the previous fortnight. Despite that, the National Feeder Steer Indicator declined by 8c on week-ago levels. This is due to an influx of heavier cattle that are preventing the Indicator from climbing.

Feedlots buying cattle at these lower weights are likely sending them back onto grass to background before they go into feedlots. Grain prices received a modest uptick in recent weeks, highlighting continued upwards pressure on prices, enabling feedlots with backgrounding operations a far cheaper alternative to put on weight.

Supply of these lighter types remains subdued, particularly as competition with restockers continues to transpire. Interestingly, however, feeders were purchasing a greater share of heavy 400+kg cattle (450kg average), with 1,022 additional cattle obtained by feeders than the previous week, highlighting beef producers are choosing to offload feeder types with weight.

Where are these cattle most prevalent?

The average feeder buying weight at saleyards, while still high, is struggling to bounce above 420kg. Evidently, there is a general threshold for how heavy feeders are willing buy. This has meant as prices rise, restockers are buying lighter to make a margin. This is showcased by the restocker and feeder weight spread which is nearly as high as it’s been all year, currently at 120kg.

This week, the Eastern Young Cattle Indicator (EYCI) saw heightened feeder activity compared to its restocker counterpart, with the Thursday weekly rolling average featuring 48% feeder against 42% restocker throughput and was still able to break new ground, achieving 1,041c/kg cwt on 30 September. A week ago, the split was much more even at 45% and 44%, respectively. Typically a higher feedlot weighting would not allow the indicator to rise as easily given the heavier feeder type animals generate lower c/kg prices.

However, this week, solid rainfall in key regions has allowed restockers, feeders and processors to continue to pay up for lowering supplies, highlighting high times ahead if a wet spring prevails.