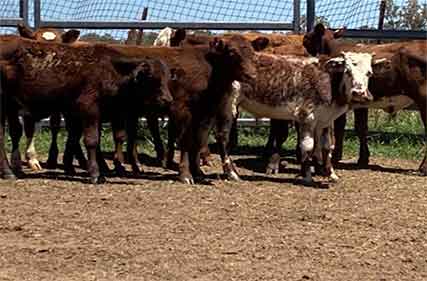 The five to 10 month-old Shorthorn and Hereford cross steers from Gilgandra, NSW, weighed an average of 118kg and sold for $1370.

The 32% increase in the supply of heavy steers continued the trend of recent weeks, with a steady amount of well finished grassfed yearling steers hitting the market.

All five young heifer categories registered a sharp rise in offerings this week, with prices averaging lower for all but one.

It was another varied week through the breeding lines, with the 1,224 PTIC heifers slipping back $191, to average $2,595/head after last weeks $352 gain. Following a higher clearance rate last week, PTIC heifers slipped back to 55%, with reports indicating producers this week went back to targeting the heavier unjoined lines.

There was a limited offering through most breeding categories this week, with 527 PTIC cows selling to a 73% clearance rate and averaging $244 higher on last week, at $2,739/head.