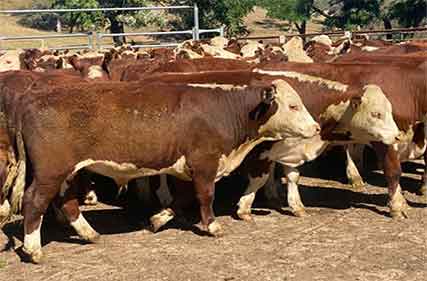 These Poll Hereford steers from Wantabadgery, NSW. averaged 426kg and sold for $2535.

Overall AuctionsPlus results last week were mixed, albeit with clearance rates for the lightest steer lines continuing to exceed 95%.

Heavy steer prices bounced back, after a second week of reduced numbers, with 400kg+ steers jumping $207 on last week, to finish at $2,467/head – equating to 550c/kg liveweight.

Even with the exceptional clearance rates and robust demand, prices for the lightest steers eased $118 and $103/head, respectively, with an increased supply of dairy influenced lines in the southern sales impacting overall averages.

Utilising movement data, the majority of the PTIC purchases are headed towards the northeast corner of NSW. With very thin numbers through most of the breeding lines reported, prices were varied, with the 777 PTIC cows offered selling to a 77% clearance rate – averaging $154 higher on last week, at $2,879/head.