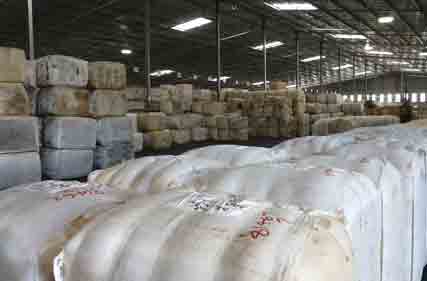 Wednesday saw the market continue to rise in the sub 18 MPG’s however there were small price falls recorded in the 19-21μ MPG’s, extending the already huge micron premium between the 17 and 21 MPG to 1361c (101%) in the northern region.

A slight increase was measured in the AUD-USD currency exchange which pushed the EMI in USD terms up 10c for the week. From the 41,771 bales offered, 89.7% cleared to the trade and whilst the Crossbred sector was once again very high in the percentage of passed in lots, Melbourne recorded 11.7% pass in rate of its fleece offering. Once again, buyer support came from a wide range of Australian Export, Chinese Topmakers and Indent buyers, however the mix of Australian trading exporters changed from the past few weeks.

Merino Skirtings followed the upward trend adding 10-20c on both days with poor for style and high VM holding form on Wednesday. Increased buyer activity was more evident this week and many skirting buyers commented on the increased competition in the skiting sale room.

Crossbreds remain difficult to get a market direction and this week was no exception. Small rises were measured in the best style and prepared lots early in the week, however by Wednesday’s close, most of the rises evaporated, resulting in a slightly weaker close.

Merino Cardings came out of the blocks on a positive note with rises measured in all centres on Tuesday, the positive trends continued into Wednesday’s market. Fine locks added 30-40c with their coarser counterparts crutching and stains adding 15-25c for the week.
Crossbred Oddments remained erratic from a very low price basis especially in the coarser micron categories.

This week’s offering increases to 46,392 bales rostered in Sydney, Melbourne and Fremantle. The early market intelligence for next week’s sale brings some apprehension on the fleece and skirtings coarser than 19.5μ, especially lots with poor specifications for staple strength, vegetable matter, colour and cotted fleeces.

Superfine wools are still in keen demand and performing extremely well – in fact the 17 MPG is performing over the 90th decile and is at the second highest price in history for this time of year. Whilst demand is still good, the accumulative pressure on finance and logistics continues to present challenges to our Exporters and Topmakers due to the added cost as a result of current logistics bottlenecks.

This situation is not expected to improve anytime soon. This of course will have a flow on effect all the way up the processing and manufacturing stages. Looking on the bright side of our wonderful fibre is that it does not perish.