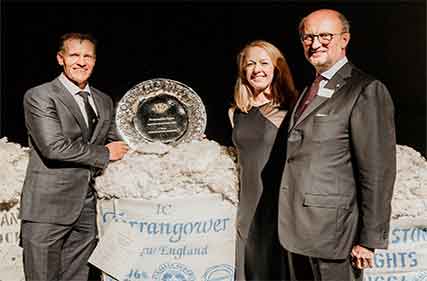 This year, for the 58th edition of the prestigious program, the Ermenegildo Zegna Group celebrated its award ceremony alongside the ASWGA’s 50th anniversary in the foundation’s birthplace of Ararat.

The Group honoured Australia’s best growers by awarding the “Superfine Wool Trophy” and the “Vellus Aureum Trophy” during an exclusive celebration hosted by Paolo Zegna, Member of the Board of Directors of Ermenegildo Zegna Group, held at The Ararat Gallery TAMA on Saturday 14th May, in the presence of representatives of the major institutions associated with the world of wool.

Both competitions continue to be intended to encourage and reward breeders for their commitment to quality, in Australia. The winning wool bales and fleeces are judged according to a strict set of criteria including fineness, style, strength, colour and evenness.

While 2nd and 3rd place winners were Simon and Ann Louise Cameron (Kingston – Conara, Tasmania) and Clive and

While the winners of the Vellus Aureum Trophy were Bradley Sandlant (Lexton – Lexton, VIC) with a new record at a

Rowbottom (Myndarra – Orford, Victoria) were respectively 2nd and 3rd in the competition.